Seldom do I turn down an opportunity to train. When I do, it’s usually because the topic entails funny-smelling substances that burn the skin on contact or ones that may be politically controversial. However, this one, in my humble opinion must be discussed in every community across America.  That is Human Trafficking.

The practice has been around since humans walked the earth.  And I’m certain many have seen news reports of the practice occurring in America.  But very little discussion occurs in the dozens of newsletters, email blasts, podcasts and social meeting that caters to the fire and emergency services audience. The law enforcement community is actively pursuing the crime.  Even the trucking industry has a group called Truckers Against Trafficking!  But where is the fire service?  Where is EMS?  You’ve been to the homes or businesses where something just isn’t right or appears wrong or “off”. What do you do?  Blow it off as your imagination or watching too many FBI movies?  So, you dismiss it, write your report and file it under – “not my job”.  Perhaps a missed opportunity to save someone’s daughter or grandson.

What is it? As described by the Department of Homeland Security, Human Trafficking (HT) is modern day slavery. Whether the individual is being held for domestic work, labor or commercial sex, everyday men, women and children are exploited in every part of the world, including here in the United States. Nearly 25 million people are affected worldwide by this $150M industry.1 Trafficking humans occurs everywhere across urban, suburban and rural communities. This ugly epidemic is a highly profitable crime and a violation of basic human rights.

Some readers may ask, “What’s Human Trafficking got to do with me? I’m just a firefighter or EMT, or fire inspector.”  Because you go into people’s homes and businesses…and you see things.  Sometimes those things you see may in fact be evidence of trafficking.  Men are often trafficked for labor while females are most often exploited for sex. More than 17,000 child sex trafficking reports were received in 2020 in the United States.2 Your ability to spot the signs of trafficking, ability to report your “inklings” to law enforcement and your willingness to stop this crime could save the life of someone’s sister, daughter, brother or friend. 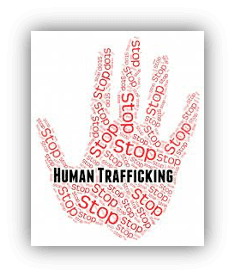 Human Trafficking is the criminal exploitation of a human being. It can be further defined as the use of force, fraud or coercion to induce another person (regardless of gender, age, ethnicity, nationality, race or socioeconomic background) to provide forced labor, domestic servitude or commercial sex.  Human Trafficking should not be confused with human smuggling, which involves transporting people illegally.  While the two are often interrelated, the two actions are considered separate crimes.

Indicators of Human or Sex Trafficking

There isn’t a “typical” look of a human trafficking victim or situation.  Don’t rely on nationality, age, gender, socioeconomic status or race as definitive identifiers of a victim.  Often the crime occurs in plain sight, requiring the responder to be situationally aware of the surroundings, and considering the totality of the call for service.  By communicating with the victim and being observant of your surroundings during your scene safety sweep and patient assessment, you may develop the sense that an act of Human Trafficking may be taking place. During your interaction with the patient, resident or worker, you may discover some of the clues listed by the Department of Homeland Security’s anti-Human Trafficking Blue Campaign project:

Oftentimes victim control is reliant upon the trust factor.  Remember, the trafficker controls the victim without exception – money, housing, and affection, which sometimes results in an unusual relationship.  The trafficker may be the victim’s parent, guardian or boyfriend.  If this is the case, it may cause the victim to refuse or be reluctant to discuss his or her problems, injuries, or living conditions.

If an individual refuses to speak to you or seems fearful of something outside the immediate context of the call, or displays signs of abuse, you may have responded to a human trafficking site. When responding to work sites, take note if it appears workers live near or on the premises.  Or if responding to a motel, take note if there appears to be a lot of foot traffic, often throughout the night. When encountering homeless or runaway juveniles, domestic violence or even calls to suspected gang houses where some occupants show signs of being controlled or abused, you may have unknowingly interacted with trafficked victims.

During an emergency call you may walk through the house and notice too many people living in a small space, multiple beds lining bedroom walls or other substandard conditions.  If you enter a home where children are present and notice pornography in plain view or an inordinate amount of audio-visual equipment, observe the rest of the environment.  Often, child victims of sex trafficking are taught that having sex with adults is normal. Take mental notes, be situationally aware of the circumstances. Watch for children who are talkative with you, but fearful of the family. 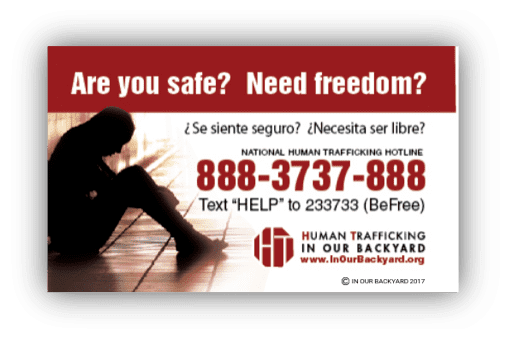 It’s never easy to report abuse, whether it’s suspected elder abuse, physical or emotional abuse, domestic abuse or suspected human trafficking. Some will be reluctant for fear of ridicule…or wrongly accusing. But, arming oneself with knowledge and a modicum of confidence, reporting your suspicions becomes easier.  You may ask, “What if I’m wrong?” But, what if you’re right?

Here are some points to consider when reporting your suspicion of human trafficking:

Below are more tips to enhance your community’s Human Trafficking awareness: