Recently, a short article in Inc. magazine popped up in my daily news feed, which delved into the traits of bad leadership.  Lately, there has been an abundance of articles dealing with bad leadership.  Perhaps a reflection of the times?

In 2022, I’m making a concerted effort to look at things from the positive perspective.  It’s not in my nature, so I hope it doesn’t bite me.  Now, rather than looking at negative traits, let’s switch the tables and focus on some positive traits that good leaders practice.

Recognizing People. We’ve all heard the saying, firefighting and emergency services work is a thankless job.”  That is changing quite a bit, but often the “thanks” comes from outside the department, through civic organizations, auxiliary groups and the public.  Side note:  We must take care not to align ourselves or organizations that continue to garner negative reputation or feedback.  Without getting into the nitty-gritty of that topic, just remember as some areas of the country are experiencing defunding certain public services, make sure your folks can clearly delineate who they are and what they do.  Example? If your “SWAT Medics” are dressing in all-black and starting to look more like a law enforcement unit, remember, when one agency catches cold the other agency may too. 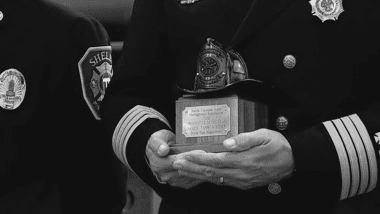 Now, back to the subject at hand. Have we witnessed a leader thanking his or her members with a simple, hand-written note highlighting an action that exemplifies the “service to others” mantra? I’m not talking about a rescue under adverse conditions or a save at an EMS call – just a simple display of actions above and beyond, such as stopping to assist a stranded motorist.  Although the act may not rise to the level of a citation or medal, a short note citing the action written by the chief or commanding officer oftentimes is priceless.

The chief of an agency I am familiar with was noticing the organization’s morale slipping following an ugly budget phase when raises were minimal.  After giving thought, she purchased meal coupons from a local fast-food chain and distributed them among field supervisors.  The instructions were simple.  When the supervisor witnessed a member or unit doing something “good” (that was left to the supervisor’s discretion) the individual or unit was issued the coupon(s). No muss.  No fuss.  No formal citation or award plaque.  Just pull the unit or individual aside, tell them why they were recognized and give them the coupon(s). Positive, timely feedback. It cost the chief a few hundred bucks every other month.  A few months into the program she noticed the morale beginning to tilt towards the positive.

A former colleague would hold a monthly breakfast for all off-going crew members at his agency. Eggs, bacon, grits (it was the south after all), all the “fixins’ would be ready for the crew members as they got ready for shift change.  This same leader would go down to the local grocery store, buy several gallons of ice cream and garnishes, visit the on-duty alarm office telecommunicators and serve up their favorite sundaes.

In another example, every employee (of a 350-member department) would receive a hand-written birthday card thanking the employee for another year serving the community. While this personal touch cost a few bucks out of the chief’s pocket and took a few hours a week to do, the dividends in positive energy, organizational loyalty and improved community service was a great return on his time investment.

Respecting Employees. The “great resignation” of 2021 and 2022 is in full swing across the country.  Without getting into the politics or economics of the phenomenon, it is widely thought that the actions of millions of Americans are based not solely on money, but respect. Oftentimes the catalyst is a lack of respect by the leader towards the employee. In this case a supervisor to a firefighter or medical responder.  How many times have you or one of your crews responded to domestic assaults caused by one disrespecting another?  By a misunderstood word or slight action, an individual takes offense and reacts aggressively.

In the station setting, recognizing the value of showing respect for all members can establish an organization supported by a loyal workforce.  Whether the interaction is between an administra-tive support member or line members, actively demonstrating unfettered, unsolicited respect for all members on the team builds strength, continuity and success. Do your agency’s members work for you or with you?

Communicating Effectively. My communication litmus test is to over-communicate until I begin getting feedback that there is too much communicating.  In my career, I seldom received that feedback. It has usually been: “I don’t hear anything from the puzzle palace.”, We’re treated like mushrooms.”, or “We’re never brought into the loop until it’s all over!’ These complaints are present in large organizations and small agencies alike. The complaints are often based on

employee needs to be involved, informed and have some control over their lives – and livelihoods.

There is no excuse for not: 1) Keeping everyone “in the know”., 2) Utilizing whatever media you have at your disposal to the greatest extent possible, and 3) Using the tried-and-true method of Managing by Walking Around. Without getting into too many details and notwithstanding the intricacies of departmental policies and governmental jurisdictional privacy protection, perhaps covering just a few items to consider.

Possessing Integrity. Integrity is like trust.  You deposit into those accounts regularly (daily?) until you’ve built up a good balance.

But the minute you violate this effort by action, omission or statement, your integrity (and trust) balance drops to zero. Look at the morass in DC, where trust and integrity are foreign concepts.

I don’t need to get into any specifics, but switch on a few channels and witness the deterioration of trust, integrity (and civility) in our Nation’s Capitol.

Leaders who communicate and act in ways that constantly attempt to undermine or control the rank and file, often possess integrity balances of zero.  Promise one thing and deliver another?  Zero.  Communicate an intention, but fail to deliver?  Zero. Making excuses that don’t add up?  Zero.

Providing Ongoing Feedback.  This trait is closely associated with communicating effectively. A leader would be hard-pressed to provide feedback without effectively communicating.  No matter how high we rise in an organization, as humans we all need and appreciate feedback – especially the positive kind.  But feedback of any flavor helps us to understand if we are accomplishing the wishes or needs of our manager, the community and our subordinates.  Providing feedback helps to highlight the roadmap that has been set out for us.  So, too is the regular, timely feedback we provide members that assists them in staying on track, on schedule and within the boundaries of our unit and/or agency.

I recall working for a manager who spent more time politicking and schmoozing his bosses than leading.  His method of feedback was, “I don’t give ongoing feedback.  I’ll just let you know when you screw-up.  Until then, you can assume you’re doing okay.”  That was his message to his other four subordinates.  The balance of his integrity and trust account always ran in the red. Can you imagine running a multi-million-dollar organization that way? Unfortunately, many fire and EMS agencies are.  Often you can see it in the faces of the members, in their actions and on the six-o’clock news. Utilizing the brief, and far from comprehensive list of ideas in the Communicating Effectively section above, providing feedback to all who report to you (and those who you report to) can and should become a ritual that is another tool in your leadership toolbox.

Fire and EMS departments are living, breathing organisms made up of those who wish to serve, have meaning in their lives and feel proud of their accomplishments.  Those who lead from a perspective of trust and integrity will witness their organizations becoming a vital asset to their community.